What Trump Gets Wrong About Hispanics In The U.S. 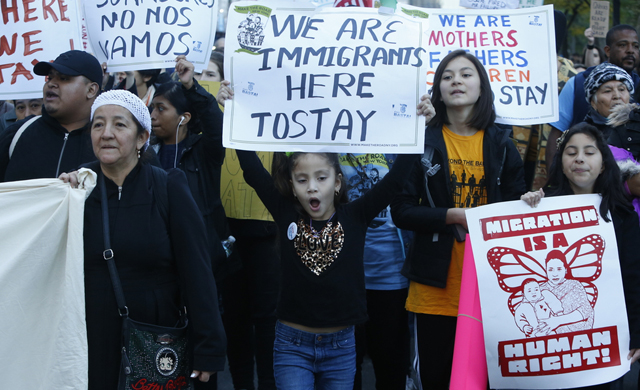 President Trump, as he ran for office, portrayed Latino immigrants as a drain on the U.S. economy, saying "The Mexican government ... they send the bad ones over because they don't want to pay for them."

But Trump’s campaign rhetoric ignored this fact: The growing Latino population injected $1.4 trillion into the U.S. economy in 2016, according to a new report by the Selig Center for Economic Growth. That’s larger than the GDP of Mexico.

The rapid growth of Hispanic buying power in the U.S. is not a result of population growth alone. Per capita, the buying power of Hispanics in the country has jumped from $13,880 each in 2000 to more than $24,050 each in 2016 -- accounting for every man, woman and child.

Upper-income Hispanics are fueling much of that spending power as the proportion of wealthy Hispanic households in the U.S. expands. Those making more than $100,000 a year accounted for nearly 16 percent of all Hispanic households in 2015, double the percentage in 2004, according to the Pew Research Center. More than half of those households reside in California, Florida, New York and Texas.

Hispanic residents' buying power in the U.S. is growing quickly

Corporations have taken note. Industries from real estate and banking to luxury automakers and prestige cosmetics are expanding their marketing towards this rapidly growing demographic.

“There’s definitely money, and growing money, in this segment so you absolutely cannot ignore it,” said Brian Bolain, general manager for Lexus marketing.

Toyota, the No. 1 auto brand among Hispanic consumers for the past decade, has created a corporate department specifically targeting Hispanics for its various vehicle divisions, including its Lexus luxury line.

As a result, Lexus is now the top selling luxury automobile brand to Hispanics, said Sara Hasson, senior vice president in Univision’s strategy and insights group who works with auto manufacturers and dealers. Other elite brands such as Audi, Mercedes and BMW are also investing millions each year in Spanish-language advertising, with luxury auto ads on Spanish television and radio tripling since 2013, Hasson said.

One ad introducing the 2017 Lexus IS line, the brand’s entry-level sedan, features a car speeding through city streets spliced with scenes from a soccer match. A male voice-over says in Spanish, “No cheerleaders. No mascots. No halftime show. All thrills. Exhilarating performance in its purest form.”

Hispanics accounted for a quarter of Lexus IS sales in 2016. But Lexus markets a half a dozen cars at higher price points each year to Hispanics, through not only traditional ads but also music videos starring Latin musicians, short programs featuring Latin chefs and athletes, live concerts, and events inviting consumers to test drive various models around a track.

“One of the things we feel that’s key to their success is they are not making an assumption that you could only afford the entry-level vehicle,” Hasson said.

Companies especially strive to build brand loyalty early among wealthy Latinos because they tend to be younger and have larger families than the non-Hispanic upscale consumer. And while the majority of the target audience is bicultural and fluent in both English and Spanish, marketers say it’s still important to create Spanish-language ads that appeal to multi-generational Hispanic families.

“Parents and grandparents, you have to address the whole family,” Bolain said. “People who have a voice and a vote in that ecosystem.”

While affluent Hispanic households tended to be Cuban American or South American two decades ago, there is growing affluence among Mexican Americans, Puerto Ricans and Dominicans, said Gabriela Alcantara-Diaz, who owns her own advertising firm in Miami and who sits on the board of the national trade group AHAA: The Voice of Hispanic Marketing.

The trade group, in partnership with Nielsen, a global information and measurement company, has identified Latinos earning $50,000 to $100,000 annually as one of the most influential consumer segments since the baby boomers.

Hispanic wealth is also expanding beyond the traditional urban centers in Miami, New York and Los Angeles to secondary markets such as San Bernardino, Calif., and Jacksonville, Fla., Alcantara-Diaz said.

“There have been a lot of regional players more aggressive in pursuing the emerging upscale Hispanics” than national opportunities, said Alcantara-Diaz, whose firm began focusing on this demographic while working with Johnnie Walker whiskey and Publix supermarkets two decades ago. “We knew it was just a matter of time before this market would influence national trends.”

Hispanics have become key drivers of homeownership growth in the U.S., accounting for 69 percent of total net growth, according to a 2016 report by the Hispanic Wealth Project. They tend to accumulate wealth through real estate and small businesses but underperform in other assets like the stock market and retirement accounts.

“Hispanics are earning more money but not making up ground on the wealth side,” said Gary Acosta, chief executive of the National Association of Hispanic Real Estate Professionals, who created the Hispanic Wealth Project with the goal of tripling Hispanic household wealth by 2024.

The bank is also opening new mortgage offices in branches that serve large Latino populations in Los Angeles, Dallas, Houston and Phoenix. And it has made a commitment, in collaboration with the Hispanic Wealth Project, to lend $125 billion to Hispanic homebuyers by 2025 and invest $10 million from the bank’s foundation to educate and counsel Hispanic homebuyers.

(Wells Fargo’s commitment follows a $175 million settlement in a lawsuit alleging that the bank discriminated against Hispanic and African American borrowers.)

In contrast to the many other companies pursuing wealthy Latino consumers, Sotheby’s International Realty, which focuses on high-end properties, does not specifically tailor its marketing toward Hispanics, let alone advertise in Spanish.

In Miami, where Sotheby’s average property sale price tops well over $1 million, Latino agents make up about a third of the real estate agents. But the nuances of language and cultural differentiation tend to disappear, said Michael Valdes, a global vice president at Sotheby's and the company’s highest ranking Latino.

“At the luxury level, Hispanics have a seat at the table and the menu doesn’t have to be in Spanish,” Valdes said. “At that point, they all speak the language of money.”

Statement on Donation of over 60,000 N95 Masks to Community Centers Providing Health and Mental Health Services to Underserved Hispanic Communities