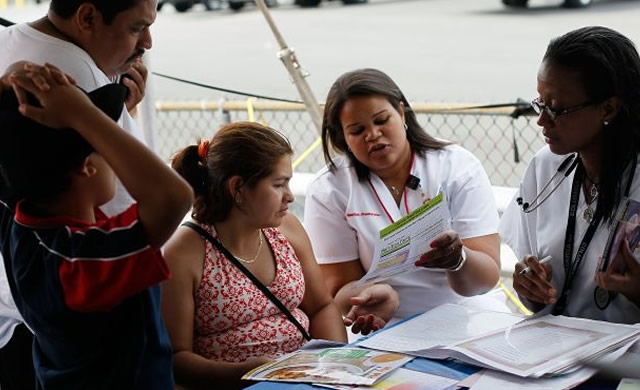 The debut of the Affordable Care Act's Health Insurance Marketplaces on Tuesday starts the clock on a six month race for the Obama administration to enroll Latinos, the nation's most likely group to be uninsured, and the program's most critical customers.

Consider this: Of the nation's 48 million non-elderly uninsured, one third, or more than 15 million are Hispanic. According to the U.S. Census, one in three Hispanics (31 percent) under the age of 65 are without insurance. almost double the 16 percent of the overall population.

Latinos stand to gain the most from the ACA, commonly called Obamacare, but it's the same vice versa -- Obama's marquee and controversial health care reform bill enters a crucial first year under intense political scrutiny.

Democrats root for a smooth process. Republicans bank on an Obamacare implosion as retribution that it was a bad idea from the start. Meanwhile, uninsured Latinos, 69 percent of whom don't understand the law, are the litmus test.

"The success or failure of the affordable care act is hinged on effectively reaching the Latino community, that is not hyperbole," said Jennifer Ng'andu, director of health and civil-rights policy at the National Council of La Raza, one of more than 20 Latino advocacy groups the Obama administration is counting on for health care outreach efforts.

The Obama administration says 10 million Latinos are eligible for the health care program, and 4 million speak Spanish. For its part, the administration is launching the National Week of Action on October 21, unveiling the spanish language enrollment online on CuidadoDeSalud.gov three weeks late. A 24/7 call center staff will offer bilingual help over the phone as well as a Spanish paper application.

But there are questions about the readiness and bilingual abilities of Obamacare "Navigators," trained civilians available to answer questions about the program throughout the country. And they question whether a recent $150 million awarded to community health centers across the country for enrollment and outreach efforts is enough.

Hispanics, experts say, are an ideal target for the marketplaces. The marketplaces, run by states and the federal government, offer consumers private insurance plan options, subsidized or unsubsidized, at a variety of different prices regardless of pre-existing conditions.

The marketplaces are a cornerstone of the ACA and a main part of its critical formula: if everyone pays for health insurance, especially the young and the healthy, then health care will be cheaper for everyone.

The Obama administration said it is looking for about 7 million people to purchase health insurance through the marketplaces unveiled Tuesday. Of those enrollees, the White House said it needs more than 2.6 million young and healthy people to enroll to keep costs and premiums down for the overall pool of sicker and older people.

Those who are eligible to buy insurance on the marketplaces, but don't enroll by March 31, will face a penalty of $95 per adult the first year, $47.50 per child, or 1 percent of family income, whichever is greater. The fines rise to three or four time greater in the years after.

While the individual mandate on consumers to purchase insurance is vital for the ACA to survive, it could have adverse effects on the number of uninsured Latinos who enroll in exchanges, at least through the first year.

"For many people in the Hispanic community, they don't perceive value in insurance. they have a very strong family infrastructure that backs them up," said Dr. Kenneth Lovell, Professor of Insurance and Real Estate at the University of Texas Pan American. "People are looking at today, for a family making 35,000, is it going to be cheaper for me to pay a few hundred dollars in penalty or pay $2,500 a year in insurance?"

The practical cost-benefit decision is going to be a decision made by Hispanic families primarily in the nation's top five uninsured states: California, Texas, Florida, New York, and Illinois. Unconincidelly, all five states have the largest Hispanic populations in the U.S..

But millions of Hispanics may find themselves without insurance.

When the ACA was passed, it required states to expand Medicaid coverage to everyone below 138 percent of the federal poverty line ($15,856 for a household of one and $32,499 for a household of four). Had the law stuck, 58 percent, or 9 million uninsured Latinos, would have gained insurance under Medicaid automatically. but the U.S. Supreme Court ruled in 2012 that the Medicaid expansion is voluntary for states.

As a result, 21 states, including Hispanic heavy Florida and Texas, chose not to expand their Medicaid programs, according to the Kaiser Family Foundation.

The decision by these states to not expand their Medicaid programs leaves up to 6.5 million Americans in a coverage gap without insurance, according to the Urban Institute.