3 Ways to Tell Whether It’s a Cold or the Flu—Plus, How to Treat Either 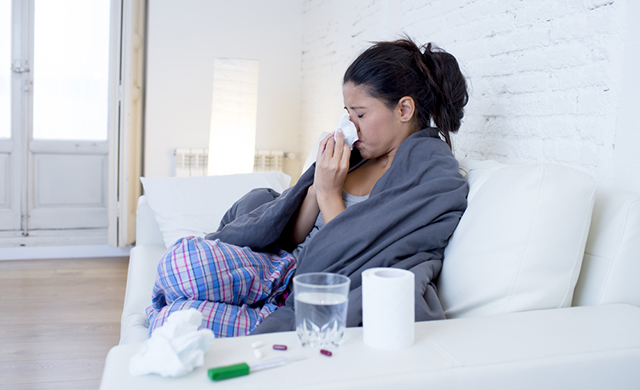 ‘Tis the season for the flu, the common cold, and many other illnesses. While both the common cold and the flu often begin with similar symptoms— aches and pains, fatigue, or congestion— it’s important to know how to differentiate between the two.

If your entire respiratory system seems to be affected…

It’s most likely the flu. Colds are typically more known for stuffy or runny noses rather than being an all-out respiratory battle. According to the CDC, a common cold typically isolates the throat and nose, leaving your lungs alone. The flu is a longer-lasting illness and typically causes more fatigue, aches, and pains than a cold.

If symptoms have been gradually appearing over the last few days…

It’s probably a cold. A good rule of thumb for knowing if you have a cold or flu is knowing how quickly your symptoms started to come on. Dr. Yul Ejnes, an internal medicine specialist in Rhode Island and spokesperson for the American College of Physicians, told MPR newspatients with the flu can describe exactly when symptoms hit them, whereas cold symptoms build over a few days. These abrupt flu symptoms can lead to other illnesses, such as pneumonia or bronchitis, so be sure to get proper rest as soon as soon as you are diagnosed.

It’s probably the flu. Headaches are rarely a symptom of the common cold, but they are likely to occur with the flu, due to the amount of congestion harboring in the top half of your body. These sinus headaches are known for pressure buildup behind the forehead, cheeks, and eyebrows, and can be especially painful upon standing or leaning forward.

You can’t exactly control your environment and who you interact with, but there are some crucial ways to keep your immune system strong.

A diet rich in fiber, protein, and a variety of micronutrients is sure to keep your immune system strong and help keep illnesses at bay. Zinc, vitamin D, and probiotic intake are all important things to account for when trying to safeguard your immune system, instead of simply calling it a day with a packet of Emergen-C.

Staying hydrated is an essential part of staying flu-free, and that means reducing your alcohol and caffeine intake. Alcohol and caffeine have shown to be dehydrating, making water as well as green tea and no-sugar-added fruit juices the best options for keeping sickness at bay.

Exercise has shown to be beneficial to the immune system, as it can reduce the amount of cortisol building up in your body due to chronic stress. While you don’t have to exercise every day, exercising does your body a world of good, with short-term benefits like boosting your mood, and longer-term benefits such as boosting longevity.

Over-the-counter medications can be effective in treating the flu, but only if taken within 36 hours of the first sign of symptoms. Research has found zinc lozenges can cure colds up to three times faster than average and can be considered a safe natural remedy to try.

Otherwise, doctors typically can’t do much for those with upper respiratory illnesses and most prescribe lots of rest and steering clear from public places. However, if symptoms persist after a week or your fever exceeds 103 degrees, then you should consult a medical professional.

Practice patience with yourself during recovery and be aware of the lasting effects the flu can have on your health. Ease into any strenuous physical activity and do your best to meet the recommended seven to nine hours of sleep each night.