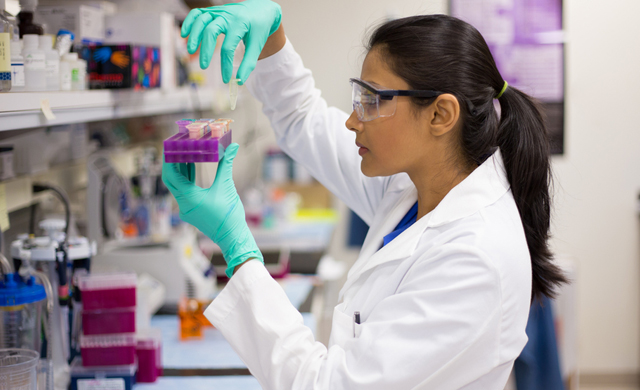 This is the conclusion of a two-part Q&A between Breast Cancer Research Foundation (BCRF) and Dr. Jeffery Weitzel, Division Chief of Clinical Cancer Genetics at City of Hope in California, in which he discusses his work in the Latina community, both in the U.S. and Latin America, and his insight on new discoveries that are helping us to understand the role of genetics in breast cancer risk for Hispanic women.

JW:  There are limitations of family history that can lead to underestimates of risk. When considering family history, it's important to factor in family structure. For instance, if a woman's father did not have any sisters, there will be no information on paternal inheritance and thus a whole generation of information on family risk is missing. In 2007, we reported that women with breast cancer whose fathers had no sisters were three times more likely to have a BRCA mutation than those with paternal aunts. We also demonstrated that family structure should be taken into account with the BRCA mutation prediction models, lest they underestimate familial risk.

The second part of the equation in population-wide genetic screening is the controversy of withholding information on variants of uncertain significance, ambiguous findings for which little information is available at the time of testing. Some have argued that patients shouldn't be told of these gene variants. However, who is responsible for tracking down those patients when the variant they carry is reclassified and determined to carry a specific risk we can quantify?

In Ashkenazi Jews, where there are distinct founder mutations, I think population-wide screening in those without a family history makes sense, but beyond that I'm skeptical that kind of genetic testing is appropriate or desirable. When you begin testing outside of a founder population, you bear the risk of increasing the burden of ambiguous genetic information. By testing someone with no family history and with adequate family structure, how do they benefit from learning of uncertain risks based on genetic screening? As long as the gene panel is small and relevant, genetic screening is reasonable—in other words, when we can quantify the risk and provide evidence-based guidelines for risk management. The large gene panels of 20 or more genes are still too ambiguous. They may contain mutations in genes that we don't yet understand.

What are some of the barriers to genetic screening in Latina populations and how is your research addressing these needs?

JW: There are two major barriers in Mexico, Peru and Colombia: not enough trained genetic practitioners and lack of resources. While mammography is a covered benefit in Mexico, there are such limited resources for screening, that if all the women eligible to get mammograms did, the system would be overwhelmed. Genetic testing creates an even bigger burden. While genetic testing has been commercially available in the U.S. for nearly two decades, it is still not widely available in Mexico or other low- and middle-income countries.

The support I receive from the Breast Cancer Research Foundation is helping us to provide both training and resources to clinics in Peru, Colombia and Mexico. We're teaching the doctors in those countries how to do genetic medicine with on-site training at the City of Hope and in Latin America, as well as providing them with ongoing access to multidisciplinary genetic tumor boards to enable continuous quality improvement and ensure they acquire the skills necessary to do genetic cancer risk assessment well. They continue to enroll patients in our ongoing prospective registry studies. We provide them with an inexpensive assay we call HISPANEL and, once the patients are counseled on genetic risk, the doctors administer the genetic screen at a cost of about $25 per patient. That pre-screen allows patients to make preventive decisions based on family history and genetic screening. We are using next-generation technologies to provide complete sequencing for HISPANEL-negative cases that meet National Comprehensive Cancer Network criteria.

We're also creating a protocol that can be transferred to our Latin American partners on a screening platform, which will be affordable for them and ultimately suitable for other low-resource settings. We also work with advocates to help them understand the importance of genetic screening to direct the limited resources to those at most risk.

A group from University of California-San Francisco (UCSF) recently identified a genetic variant common in Latina women that seemed to be protective against breast cancer. Can you comment on these findings and the impact they may have on screening recommendations?

JW: The study found a single nucleotide change in the DNA, called a SNP, in a Hispanic population. The people who had this particular SNP, which the authors believe could be traced back to an indigenous population, were protected from breast cancer. We are now working with the UCSF group to study the same SNP in Latina BRCA mutation carriers to see if it modifies the risk of breast cancer in a high-risk population. The challenge is determining whether that one SNP is protective enough to tell someone they don't need screening. Once we learn more about how the gene where the SNP occurs influences risk the better we can apply that information to risk assessment and prevention.

What do you see as the priorities in ending breast cancer disparities in Latina populations around the world?

JW: There have always been health disparities in the Latina community, but in my mind the genetic disparities have lasted longer than many. It's a multi-level problem that requires a multi-level solution. We need training for the clinical workforce to assimilate the new technologies in genomic sequencing, and we need genetic testing that is pragmatic, economical and accessible to the general population, not just those patients who can afford it. Leveraging the genomic technologies and having trained clinicians use them responsibly will help us to direct limited resources to those with highest risk. For women with high-risk mutations, surgical removal of fallopian tubes and ovaries (salpingo oophorectomy) is the most effective preventive surgery and costs a fraction of the price of mastectomy and reconstruction. Studies show that this surgery is not only a cost-effective preventive strategy, but it also saves money per year of life saved, meaning that we can't afford not to do this.