Finding Your Caregiver Role to Keep Your Loved One Connected 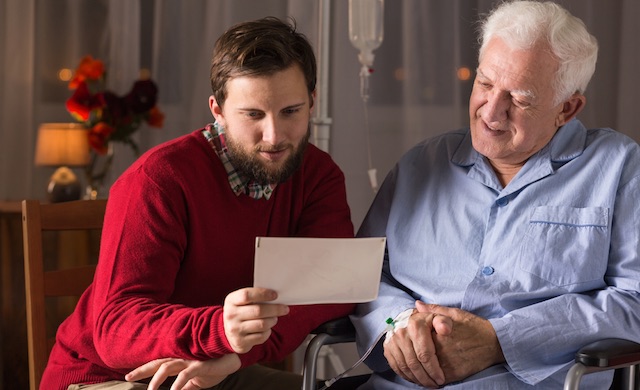 Anyone who’s ever cared for a loved one battling a chronic disease or an aging parent in declining health will soon realize, as I did, that the caregiver ecosystem is much broader than you initially think it’s going  to be. When my father was diagnosed with Alzheimer’s disease, and later moved to an assisted care facility, my mother and I were devastated.  He was such an integral part of our daily lives, and still was, but now it was with a new sense of urgency as we became his front-line caregivers.

But the puzzle that is caregiving is much more than two pieces. There are many others who are affected in such a situation and if you’re as fortunate as I was, they will find a way to help anyway they can – finding their place and their role on the caregiving team.  My brother, who lives clear across the country with his family, couldn’t be there physically but made his presence felt in other ways. My wife, who I had only just met at the time this started, was an emotional rock and much needed support system. The many friends who knew and loved my dad – they always seemed to reach out at just the right moment to see what they could do or just to listen. And the professional caregivers, who never knew my dad until he came under their care, would soon become essential pieces to the puzzle and members of “the team.”

So what are the roles needed on a team of caregivers, and how did we go about filling them?

For the most part, it happened organically. My role was essentially building and managing all of the relationships with my dad’s many caregivers, from the physicians overseeing his care to the staff who tended to his daily needs at the senior center. I highly recommend having someone in this role, or you might start to see your loved one being treated like a commodity, instead of the unique and special person that you know, with their own likes, wants and needs. This can easily lead to depression and despair and all kinds of negative side effects in behavior and mood.

This is one reason I’m sure that my mother made the commitment to visit my dad every day – her primary role being to continue to show him the love and support they had given each other throughout their long marriage. The daily visits took their toll on her, but they also paid off in ways both expected and unexpected. Of course, those visits meant the world to my father, and you appreciate it all the more when you realize not every family is in a position where someone can make that level of commitment.

But even more than that, you begin to realize the mutual impact you can have with people who aren’t even part of your family. For example, when my father’s caregivers at the facility saw my mother’s tenacity and how much she cared for him, it made them want to fight for her all the more – and to fight for him too. And as my mother became a familiar face around the facility and started getting to know some of the other patients, it would prove to be bittersweet preparation for the inevitable as we saw them worsen and eventually pass away.

But this is one of the great benefits of caregiving – in that the process as a whole gives you the time and space and experiences you need to face and accept the inevitable. For me, that meant I started grieving years before my father passed, little by little as he slid deeper into his illness. And every time I witnessed another family losing a loved one, it took me another step closer to being able to deal with our own reality.

It also made me realize that I had to keep my brother engaged in the caregiving process, in other ways, because he lived so far away but would need to play a role too. I always made sure to keep him in the loop, especially if there was something new to report, so that he wouldn’t be blindsided by any changes in our dad’s condition. He handled a lot of the work that didn’t require him to be there physically, such as most of the research that we did and reaching out to his own network of physicians and friends who had been through similar situations. Best of all, he would visit from the east coast whenever he could. And when he couldn’t, he would make our dad’s day with a phone call about his grandchildren or just to say hello.

My wife, though new to the family at the beginning, had one of the most important roles –helping me – and my mother – to stay strong. Whenever our emotional or mental state of well-being wavered, she was there to listen or handle the task at hand. And because she had grown up in a large family where there was always some form of caregiving going on, this was all a normal part of life to her. She opened our eyes to focus more on the positive, such as the long and valuable life my father had lived. She was also instrumental in pointing us to the many resources that are out there to help families in our situation, such as the Alzheimer’s Association.

The end result of building this team of caregivers, where we all had our unique and important roles to play, is that my dad always felt connected to someone – someone who loved him, someone who cared for him, someone who would be there for him. It was a powerful thing to witness on both sides – the tremendous acts of caregiving and how he responded and lit up to each and every one of them. I know that this continuous infusion of love and attention is what kept him connected to life – and kept him going perhaps even more than all the medicines he was on combined.

Your coronavirus questions answered. How is it different from the flu? Can kids go outside to play during 'social distancing'?

6 Healthy(ish) Recipes to Crush Your Next Holiday Party