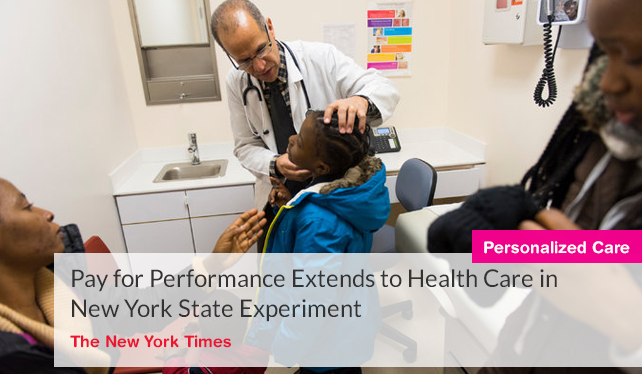 Photo by Edwin J. Torres for The New York Times

Photo by Edwin J. Torres for The New York Times

For a generation, doctors in New York’s economically depressed neighborhoods have been the ugly ducklings of the medical hierarchy. Many are foreign born and foreign trained, serve mostly minority and immigrant patients, and often run high-volume practices to compensate for Medicaid’s low rate of payment.

Now these doctors are in the vanguard of an experiment to transform New York’s health care services for the poor from a disorganized hodgepodge into coordinated networks of doctors, hospitals and other practitioners.

Medicaid officials hope to inspire these providers to work together and take a more active role in looking after their patients’ health, rather than simply waiting for them to show up when ill. The hope is that if they can do a better job of getting patients to, for example, quit smoking or manage their diabetes, doctors could reduce costly visits to hospitals and their emergency rooms.

Versions of this model, commonly called accountable care organizations, are appearing around the country for Medicarerecipients, with mixed results. New York, which has the country’s largest Medicaid budget, is committing more than $1 billion a year for five years to the experiment. If it works, more could follow.

“If we succeed, patients will be more likely to get the right tests and medicine, doctors will benefit as we simplify the business side of their practices, and businesses will benefit as we hold down health-care cost growth,” Sylvia M. Burwell, secretary of the federal Department of Health and Human Services, said this month in New York City, during a visit to promote accountable care organizations.

At the start, doctors will still be paid as they are now, typically with a fee for every service — a payment model that has been blamed for the nation’s long increase in health spending. The doctors will be eligible for bonuses if their teams improve the health of the patients assigned to them, who generally have used them in the past.

In the future, if the experiment works, providers may be paid solely based on outcomes rather than volume of services, with better-performing groups earning more than those whose patients are in worse shape.

Given the amount of money involved, the New York State project, which goes by the ungainly name of Delivery System Reform Incentive Payment program, has created unlikely alliances, mainly between competing hospitals. In many cases, doctors and hospitals from different groups have served the same patients, and the jockeying over who would get to claim them — and the government money they would bring — was so fierce that the Medicaid inspector general had to step in to resolve territorial disputes.

Perhaps the most unusual alliance is one that brought together more than 1,000 primarily Hispanic doctors serving Upper Manhattan and the South Bronx and Asian doctors working in the Chinatowns of Manhattan, Brooklyn and Queens; and North Shore-Long Island Jewish Health System, a hospital chain that serves a largely middle-class population. The nonprofit venture they formed, called Advocate Community Providers, counts more than 770,000 patients, by far the most of the 25 groups taking part in the program.

The doctors are winning respect for the characteristics that once hurt them. “They have not turned their back on the Medicaid population; they have sort of embraced it,” Jason Helgerson, the state’s Medicaid director, said. “They speak their language. They understand their culture. They are based in the neighborhoods in which these people live.”

The force behind this group is Dr. Ramon Tallaj, a former health official in the Dominican Republic who moved to the United States in 1991. Dr. Tallaj, 59, turned an unrelated collection of small medical practices into a united force of 1,200 physicians called Corinthian Medical I.P.A.; they use their combined clout to negotiate with insurance companies and, in this case, the state.

Dr. Tallaj also is politically active. Since 2003, he has given at least $157,000 to Democrats, Republicans and the Latino Victory political action committee, including the maximum of $64,800 to the Democratic National Committee in 2013-14, according to campaign finance records. He has visited the White House at least five times, according to White House records, usually as part of large social or health care events, including the signing of the Affordable Care Act, and he has been photographed at least twice with President Obama at more intimate donor events.

But his path has not always been smooth. In 2008, a federal civil complaint accused Dr. Tallaj and a partner, St. Vincent’s Midtown Hospital, of using unlicensed foreign doctors at a clinic they ran on Academy Street in the Inwood section of Manhattan. In a settlement, the hospital said it was solely responsible for hiring and credentialing and agreed to pay $210,000; Dr. Tallaj said he did nothing wrong.

Looking tropical in a linen guayabera shirt, Dr. Tallaj rose to the podium in Albany last month to talk to a state Medicaid panel about his new coalition.

Where other groups gave PowerPoint presentations studded with jargon, Dr. Tallaj showed a video testimonial that cut from playground basketball to Asian and Hispanic doctors extolling their dedication in their own languages.

“We are the transformation that New York has been waiting for,” Dr. Tallaj said, first in Spanish and then in English, as if he were addressing a political rally. “We are different.”

When he was done, the panel burst into applause, and one member was so moved she proposed adding “bunches of points” to the score for Dr. Tallaj’s group, which could bring it millions of extra dollars.

For each group the state will set goals for a range of measures, such as how well the group manages diabetes cases — based on those patients’ eyesight, cholesterol readings, kidney function and other tests — and whether it can reduce preventable hospital admissions, such as those created by poor follow-up care. A group can get a bonus each year by making progress toward its goals.

But some of the Medicaid panel members questioned the logic of having such a large, diverse group of doctors and patients like Dr. Tallaj’s, without any obvious connections among them.

“What’s the glue that holds them together?” asked Stephen Berger, a panel member and investment banker. Mr. Helgerson suggested it was the loyalty of their patients.

The sheer size of the group could also make it complicated to track patients and determine who deserves credit for any improvements in their health. Patients may continue to see any doctor they wish, even if that doctor is not in the group.

“I think we’ve learned in New York City that no patient is an island,” Mr. Helgerson said. “They tend to migrate around.”

Likewise, Dr. Tallaj acknowledged that if his patients did well, he could reap the benefits even if he had not seen them, though he said that was not his motivation.

“One of my sons said: ‘Why are you doing this? Are you going to be making money?’” Dr. Tallaj recalled. He replied, “Because this is the right thing for our community, our patients.”

Dr. George Liu, another leader in the group and an endocrinologist with offices on Canal Street in Manhattan’s Chinatown, said it would be a cinch for the Asian community doctors to meet the hospital admission benchmarks because their patients already did not go to the hospital very often.

“People say, ‘You’re not providing the services, maybe that’s why your patients don’t go to the emergency room,’” Dr. Liu said, chuckling, in his office stuffed with knickknacks given to him by patients.

On the contrary, he said, “I frequently see patients until 3 o’clock in the morning.”

Accountable care organizations are still relatively new in health care, and New York’s experiment is one of many underway. One closely watched federal project that began in 2012 with 32 provider groups spread around the country produced overall savings and improved patients’ health, but some groups that did not save enough money have left, according to an analysisby the Brookings Institution. The government is now tinkering with that design.

Uwe Reinhardt, a health economist at Princeton, thought the idea was not as promising as some had hoped. “People thought there was maybe more waste than there actually really is,” he said.

Dr. Reinhardt was also dismissive of performance bonuses for doctors. “The idea that everyone’s professionalism and everyone’s good will has to be bought with tips is bizarre.”

But Mr. Helgerson said that the current model of paying for every test and procedure was not working, and that New York had to look for a new way.

“Is it easy and is it guaranteed?” he said. “The answer is no.” But he added, “At the end of the day, our belief is the current path, this fee for service path, is fraught with peril.”

Cancer patients often 'retraumatized' by coronavirus: How to cope