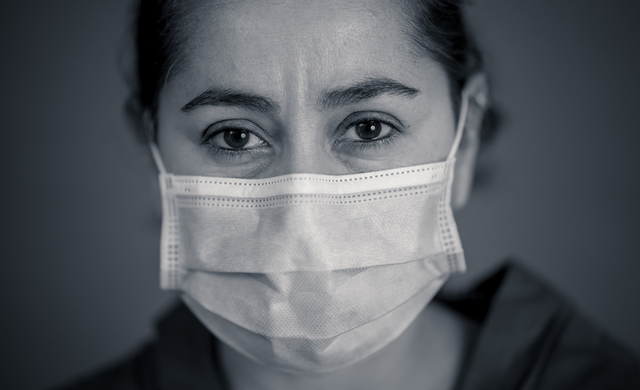 Black and Latino Californians ages 18 to 64 are dying more frequently of COVID-19 than their white and Asian counterparts relative to their share of the population, a Times analysis of state health department data shows.

Newly released figures on the grim toll of the novel coronavirus show once again profound disparities in people’s odds of survival that fall along racial and ethnic lines. In this case, the data also belie the conventional wisdom that old age is the primary risk factor for death.

When accounting for each group’s percentage of the population, blacks and Latinos under the age of 65 had a higher share of fatalities than even older blacks and Latinos. The trend is particularly noticeable among those age 18 to 49, The Times analysis found.

Preliminary racial data released by health officials in California and L.A. County earlier this month suggested Latinos were not facing any higher rate of infection or death from the virus. But experts warned that those findings were likely skewed by the fact that Latinos, California’s largest ethnic group, are typically younger than other demographics. Experts predicted that higher rates would emerge once more complete data came out.

That seems to have been borne out in recent days, as the state health department began providing more detailed data, broken out into age groups, to account for the variation among racial and ethnic groups.

“What we’re seeing is that in the younger population … the differences for both blacks and Latinos, now, became very evident,” said Dr. Sonia Angell, director of the California Department of Public Health.

As the pandemic wears on, stark disparities in COVID-19 health outcomes have highlighted socioeconomic inequities between races and unequal access to healthcare. Recent deaths also reveal the major role that underlying health conditions such as heart disease, obesity, diabetes and asthma play in the amplified suffering of black and brown communities.

“None of us knew what the numbers would look like. But we know that this is going to disproportionately affect communities that have fewer resources, have higher rates of underlying disease,” said Angell. “That’s the reality of inequities in our country. It’s something that we’re working very hard to address. It’s not acceptable. It’s not just.”

The trend goes in the opposite direction for white and Asian patients, the analysis found. As those two groups get older, their death ratios go up, roughly double for patients 65 years or older compared to the 18 to 49 age group.

To calculate these ratios, The Times divided the percentage of total deaths in each age group by the share of population for that age range. For example, blacks aged 18 to 49 represent 15% of total deaths, but just over 6% of the population, meaning they were over-represented by a ratio of 2.4 to 1.

About 7% of deaths are missing demographic information, according to the state health department. The oldest Californians are being hit hardest, with seniors representing more than 75% of the deaths, or over 1,000 people, state figures show. As of April 23, more than 300 younger people had died, including 165 Latino and 42 black patients.

Overall, Native Hawaiian and other Pacific Islanders are dying the most disproportionately — at four times their share of the state’s population. They are followed by black and Asian Californians.

Whites are slightly under-represented and Latinos have the lowest proportional rate, representing 32% of the deaths but 39% of the population — that’s partly because the ethnic group skews young and no one in California under age 18 has died yet of COVID-19.

African Americans have been found to have higher rates of diabetes, high blood pressure, obesity and smoking-related deaths than whites, according to the Centers for Disease Control and Prevention. They have a lower life expectancy and are more likely to not see a doctor because of the cost, CDC data shows.

Latinos have a lower death rate overall than whites, but a 50% higher death rate from diabetes along with higher rates of poorly controlled high blood pressure and obesity, according to the CDC.

Medical experts said data showing heightened racial disparities for younger people in California and other states go against the conventional wisdom earlier in the outbreak that old age was the main risk factor, and that younger people who contracted the coronavirus would experience something similar to the common cold or a mild flu.

“That was before we understood the other variables that put people at risk,” said Dr. Clyde Yancy, a professor and chief of cardiology at Northwestern University’s Feinberg School of Medicine. “They are not immune to risk just because they are young. Once hypertension is present, once obesity is present, and especially this pre-existing cardiovascular disease, irrespective of age, there’s a higher risk, and the California Department of Public Health data seemingly are bearing that out.”

California is not the only place where emerging health data have made it clearer that communities of color are suffering disproportionately. The coronavirus is killing black and Latino people at higher rates than whites in New York City and other cities, he said.

“As a civil society we should not be willing to tolerate disproportionate suffering by any segment of our population,” Yancy said. “This is unacceptable and we can do better than this.”

Scott Blanks, a 34-year-old dental assistant from Whittier, died last month from COVID-19. He was sick for two weeks before going to the emergency room and being tested, according to his family.

Karen Blanks doesn’t think that knowing the virus was killing black and Latino people at higher rates would have prevented the death of her brother in law. What would have made a true difference is if federal officials had taken the virus more seriously and pushed for stay-at-home orders sooner, she said.

“It attacks who it’s going to attack,” she said. “I don’t think that knowing that would have saved Scott or any black person or Latino person. Because you’re black, or Latino or Asian, it doesn’t pick who it wants to make sick. It just attacks.”

“When there is something like a pandemic virus that sweeps across all of our communities and we see that black and brown folks are dying at a greater rate,” she said, “it’s something that we should all be concerned about, right, about what it says about whether we’re adequately meeting the needs of our entire population.”

When it comes to higher coronavirus death rates for blacks under 50, he said a variety of factors may explain it. They generally tend to work in service jobs that require them to leave their home to earn a living, increasing their risk of exposure, he said.

“They don’t have the luxury to be able to survive by working from home,” Aguilar-Gaxiola said. “Their jobs require their presence, which puts their lives on the line by being infected.”

That’s compounded by them not recognizing symptoms immediately or seeking timely healthcare because of distrust of hospitals and public health messaging.

Latinos under 50 are also a vulnerable age group due to the higher rate of blue-collar and service labor, he said. Also, Latinos have lower rates of health insurance coverage, especially in the undocumented community.

Both groups experience overcrowded housing conditions at higher rates and are often expected to provide care for older parents and grandparents, said Aguilar-Gaxiola. A recent Times report found that Los Angeles County has five of the 10 most crowded ZIP Codes in the United States and public health officials said such housing conditions can accelerate the spread of the virus.

Whites and Asians tend to be more educated, which translates to highly skilled jobs that often can be done remotely.

Even if they are able to access healthcare, blacks and Latinos face longstanding barriers in medical providers taking their ailments as seriously as other groups.

“It’s important to recognize the history of mistreatment of communities of color by our healthcare institutions also may play a role in the level of trust that some communities may have,” Burke Harris said.

Marta Segura, a Los Angeles-based environmental justice and public health consultant, said the latest data “are definitely showing that Latinos are more affected than previously thought, and it’s because of the historical inequities in these black and brown communities.”

Segura said communities of color are also more vulnerable to COVID-19 because they have greater exposure to an array of societal and environmental ills that amplify their risk for disease.

“Latinos and African Americans live nearer to freeways, in neighborhoods where there is a lot more pollution and oil drilling, so that causes more diseases like asthma, chronic obstructive pulmonary disease, diabetes and heart disease,” she said.

To prevent such uneven outcomes in the future, Segura said, state officials must fix the root causes, and go beyond expanding testing and treatment and other measures that respond only to the immediate health emergency.

“That’s the band-aid to mitigate the ravages of this particular pandemic,” Segura said. “However, if we want to deal with disasters and pandemics of the future, we need to address the larger failures of our policies and economic frameworks in all communities, but particularly in communities of color that have been disproportionately impacted.”

Angell, the state health director, said California has moved to counter racial disparities during the pandemic, even before it had confirmed it through patient data.

That includes steps to provide testing and treatment to recipients of Medi-Cal, California’s version of Medicaid, public service announcements targeting undocumented immigrants, and a push to open dozens of testing sites in “testing deserts” in predominantly black and brown communities across the state.

“While we have this data,” Angell said, “we didn’t need this data to act.”