The Seattle Globalist is a daily online publication dedicated to elevating diverse voices through media. 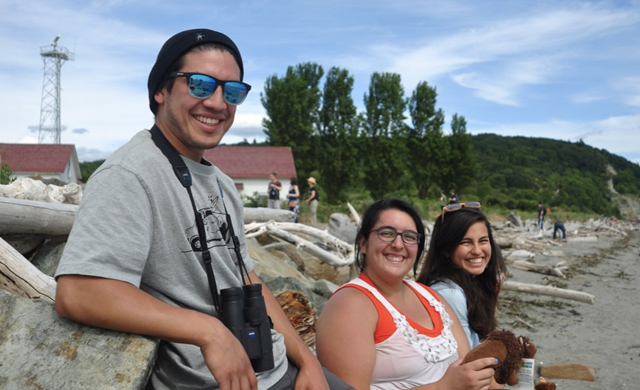 It’s early February. A group of forty people gathered at Snoqualmie Pass are strapping on snowshoes, a light snow falling around them.

For some, this is the first time they’ve seen snow.

Gonzalez is talking about her work as an ambassador for the Washington chapter of Latino Outdoors, a budding national nonprofit that works to connect Latino communities with nature and outdoor experiences.

As the National Park Service approaches its 100th birthday next month, many are rightly asking why outdoor recreation is a predominantly white activity, and what can be done to increase diversity and inclusion.

Latino Outdoors was born out of this narrative. Hispanics are the second fastest-growing demographic in the U.S. and are among the most underrepresented groups in conservation, outdoor recreation and environmental education organizations, according to the group. The problem, they find, is that many nonprofits do outreach to communities of color or low income communities one time, without coming back to cultivate that relationship.

That’s something that rings true for Gonzalez based on her own experiences in Seattle.

She’s sitting on a big rock on the West Point Lighthouse Beach in Seattle’s Discovery Park, looking out over the Puget Sound. Fellow ambassadors David García, 25, and Michelle Piñon, 24, are beside her. This Sunday afternoon, they’ve met up to discuss their hopes for the future of Latino Outdoor’s local chapter.

Since their first event— a bird walk in the Union Bay Natural Area last December — they’ve organized a half dozen outings of all kinds, from kayaking to hiking and climbing. They’re planning on continuing to host one event every month going forward.

“I see us as really providing a different platform for engagement, one that isn’t a one-off, one that is about building a community of people,” says Piñon. “We’re trying to avoid that pitfall of being that one-off time that you send your kids to this one camp, and they might never see that particular place again.”

One of the group’s participants and advocates is Paulina López, who lives in the South Park neighborhood of Seattle. For her, Latino Outdoors is a great way to encourage families to get active by giving them a first introduction to the outdoors.

“How do we get Latinos into making more healthy habits into their daily lives, and also incentivize those who have children to do the same?” López asks.

She points out that one of the main reasons families don’t exercise outside is that many simply don’t have time to research where they can go. The fact that Latino Outdoors provides all their events free of charge — from transportation to gear and parking passes — makes it easy for families to participate and gives them the confidence to later go out and explore on their own.

For Karitza Medina, who moved to Seattle from Indiana after college about a year ago, Latino Outdoors has been a way to meet people who also enjoy outdoor activities in her new city. Her first event was a kayaking outing in Lake Union; since then, she tries to put all events on her calendar and looks forward to meeting other Latinos that are new to the area.

“Our culture as Latinos is similar… If I meet someone from, let’s say, El Salvador or Guatemala, we’ll have similarities and I’ll feel very happy to have met that person,” she says, adding that the group welcomes anyone, regardless of ethnicity or cultural background.

Medina thinks that one of the keys to Latino Outdoors’ success is that the person organizing the hike has something in common with the people they’re trying to get to participate.

“I try to encourage the Latinos that I know to go,” she says. “They will feel more at ease and comfortable [with time] because they will have someone to relate it to.”

Back at the beach in Discovery Park, the three ambassadors — who all volunteer their time to coordinate the events and reach out to sponsors — say that the response from the community has been huge, and that it seems like a lot of people, not just Latinos, have just been waiting for something like this to appear in Washington.

“I think we sometimes see people through a certain lens of struggle and say, ‘Oh those poor communities of color, they can never get outside, we gotta save them,’” Gonzalez says. “But in reality there are a lot of people like us that…have this passion, that maybe even majored in it, but felt lonely for another reason, like we didn’t quite belong.”

As our interview at Discovery Park is wrapping up, an osprey that’s been cruising up and down the beach suddenly arches its wings upward, retracts its legs and dives into the water. It goes completely under for a brief moment and then re-appears, a fish dangling from its claws.

he ambassadors hop up from where they’re sitting on the rocks and follow the bird’s flight.

“I always think: how many kids are there out there that…don’t have the resources to get out to places to look at birds and look at nature,” Garcia reflects.

“Maybe one of them is the next big birder, or the next big marine scientist? How can I be passionate about this…how can I want to protect this if I don’t even know that it exists?”

Is It Safe to Return to Offices? How to Resume Work During COVID-19 Pandemic

How to Manage Anxiety About the Country Reopening