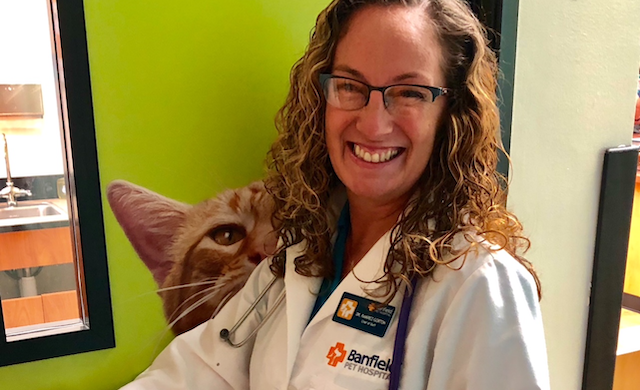 Many veterinarians will tell you they’ve known since childhood that they wanted to work with animals.

Not so with Maria Ramirez-Gorton. She wanted to be an actress, a movie star, a singer on Broadway.

“I was a theater geek for sure,” she said.

During a break between high school and college, she took the time to really think about life and came to a realization: maybe theater was not the most practical path to take. She remembered that she was always did well in science classes. Her sister-in-law was a nurse, so she thought that seemed like a good career.

So she enrolled in school and finished all the pre-requisites she needed to apply for nursing school. While she was waiting to learn if she was accepted into a program, again she took some time to think about what she really wanted to do.

“All my friends kept telling me, ‘you’re so good with animals,’” said Dr. Ramirez-Gorton. “They reminded me that in middle school I was late to class one day because I had stayed home to help our cat have kittens.”

In fact, she had prepared in advance for the big event by going to the library to research cat births and what to do. That’s not something many middle schoolers would do on their own.

Maybe she had wanted to work with animals since childhood after all.

She realized she didn’t want to be a nurse, she wanted to be a veterinarian.

Luckily all her prerequisites for nursing school also applied to veterinary school, though she still needed a few, so she applied and got accepted into the agriculture department at Cal Poly Pomona in Southern California. At that point she had a two-year associates degree. She didn’t have a bachelor’s degree yet, but she did have a 4.0 grade point average, so she thought: why not try to get into veterinary school now?

“I just blindly went for it,” she said, with a bit of a chuckle. “I thought: why wouldn’t they take me? But I didn’t get in right away, not even an interview.”

So the same instincts that sent her to the library to research cat births in middle school sent her on a quest to learn how to make herself a good candidate for veterinary school.

She learned they don’t just want perfect grades, they want well-rounded students. They want to see volunteerism. So that next year, while finishing her bachelor’s degree, she started doing research at Cal Poly Pomona’s equine research center. She presented posters and attended conferences.

She got a job as a receptionist at a specialty veterinary practice, and got training from them to be a veterinary assistant. She also worked at a veterinary emergency department. That work, combined with her research with horses, helped her candidacy.

The next time she applied to six veterinary schools and was accepted into five.

“If you have trouble at first, don’t give up,” she said. “Figure out how to get in. It’s okay if you don’t get in the first year. Ask what to do to make yourself a better candidate.”

She chose veterinary school at Kansas State, because her husband’s family is from there. She practiced in California for a year after graduation, then she and her husband packed up their two kids and their dogs and moved across country to Newport News, Virginia, where she still practices today.

She worked for a private practice for three years before starting to explore her options. That’s when she discovered that there’s so much opportunity beyond running a small clinic. She didn’t have to own her own practice, she could lead a hospital for Banfield.

“It was exciting to see how much opportunity there is,” said Dr. Ramirez-Gorton.

She’s been with Banfield since 2010. As chief of staff and hospital leader, she works with the head of operations to lead the hospital. She has led two hospitals for two years, and is also currently helping out a third hospital.

It’s her job to make sure each hospital is maintaining the highest quality of medical care. She reviews medical protocols, updating them when there is new research, and then training the doctors and all staff on the new practices. She also conducts audits to make sure best practices are being followed.

“I’ll come in with a checklist of 50 essentials to see, on any given day: What is our score? Are we following the protocols? Are there barriers we can address? Do people have the right training?” said Dr. Ramirez-Gorton.

But even though she spends a lot of time managing and leading, she still enjoys when clients who have known her for years want her to see their pets.

“I have clients who have trusted me over the past eight years, and I’m able to spend time with them when their pet is sick to try to figure out their puzzle,” she said. “They trust me wholeheartedly and do what I say. Some days are really rough, but when you have those moments when it all comes together, those are the ones that remind you of why we got into this in the first place.”

Dr. Ramirez-Gorton had a special message for anyone who has doubts about the opportunities available to them: “I was not born in this country. I was born in Yucatan, Mexico, and lived in Mexico City before moving to California. My parents didn’t finish middle school – they wanted a better life for their kids. I didn’t even know English. I just learned along the way in school. Whether you have wanted to be a veterinarian from childhood, or it’s something you discovered later – it doesn’t matter where you came from. There is opportunity. Look at what you can do.”