The Heart of Leadership – Caring for Colleagues During Hurricane Maria 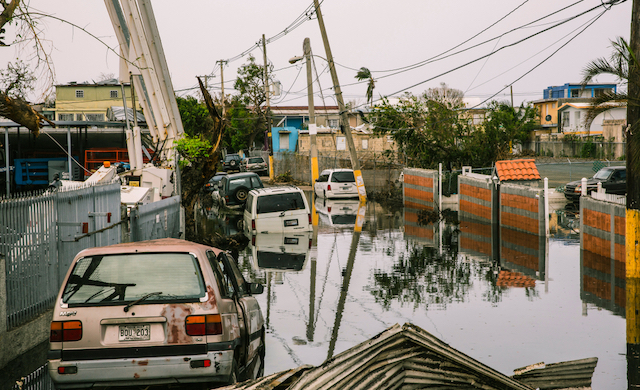 As Field Director, Alejandra Ospina oversees 23 Banfield Pet Hospitals throughout Miami, Fort Lauderdale and Puerto Rico. She is responsible for day-to-day operations and staffing, and for making sure the hospitals have what they need to ensure a great client experience and to serve people and pets in their communities. She’d only had that role for nine months when Hurricane Irma hit South Florida and a week later the devastating Hurricane Maria hit Puerto Rico.

“It’s been almost two years since then and you would think we’d recovered, but as recently as yesterday we had a power outage in a hospital in Puerto Rico,” she said. “After that experience, I have a very unique and special bond with the group on the island. The level of impact hurricane Maria had on everyone really marks you.”

South Florida was hit by Hurricane Irma. It wasn’t as big as Maria, but Ospina lost power in her home and Banfield hospitals in Miami lost power and were damaged. Ospina was thankful to find a local Starbucks with power so she could connect with her teams. That’s when she saw that news that Maria was on track for Puerto Rico in the next week.

“You go into complete shock,” said Ospina. “You have to be there for the Miami team as we’re all going through this, and then to get everything ready within days to help our Puerto Rico teams prepare to face the strongest Category 5 hurricane the island has ever seen.”

Preparing for the Unknown

From Miami, Ospina supported the team on the island as they secured all buildings and facilities as best they could. Then she focused on setting up as many possible communication channels in advance, so they could keep in touch and also keep track of each other.

She got emergency contact information for all 80 associates, two phone numbers for each, and had everyone print out hard copies. She made sure all addresses were up to date on the computer system. She used WhatsApp to set up chat groups with all leaders in advance, so they could communicate with each other via Wi-Fi.

“Our plan was to communicate four times a day – twice in the morning and twice in the afternoon,” she said. “Then, all I could do was send my friends all the positive energy as possible.”

As Maria hit, Banfield’s Puerto Rican associates sent messages with videos and pictures along with updates about losing power.

“Watching from Florida, there’s this feeling of helplessness,” said Ospina. “That morning, they were very active in messaging us. Then, that evening the messages stopped. There was no response. I started using text to see if maybe I could reach someone. I started making phone calls. I was terrified because I didn’t know what was going on. I lost touch with every single associate – leaders, doctors – no one was responding.”

She had to rely on the news. She followed local Puerto Rican news on Twitter and used another app to get local radio and news stations from the island.

“I was terrified for the life of my team,” she said. “It was probably 36 hours that I didn’t hear from anybody. I could not account for my team. I was just hoping that the reason I wasn’t hearing from them was that they’d lost electricity, Internet and cell towers.”

She tried land line numbers and home numbers, and that’s how she was finally able to connect with some associates after a few days. She also got creative and was able to track people down through social media. One by one she started getting reports from people.

After a week there was still one associate unaccounted for. The local Banfield hospital hired someone to go to his house on the outskirts of town to check on him.

“As we were getting ready to deploy that person, the associate reached out and called me,” said Ospina. “I was crying jumping for joy knowing that he was safe. He couldn’t leave his house because it was flooded, but he was safe.”

All in all it took her team a week to account for everybody. Everyone was physically okay but had tremendous damage to their homes.

A Lifetime of Service and Leadership

Ospina’s parents came to the United States from Colombia about 40 years ago, in hopes to have a better life with more opportunities.

“They hoped to make a better life,” said Ospina. “I’ve always had a sense of responsibility to make sure I was able to take care of my parents and give back to them for what they have done for me.”

Her parents always instilled the importance of education and hard work – they’re her inspiration to continue working hard and help others along the way. Ospina served as family translator at doctor’s appointments, including visits to the veterinarian for the beloved family dog, Osito.

“One day my mom and I were at Banfield with Osito, and my mom said, ‘You love animals so much, you should apply for work here,’” said Ospina.

She got a job at Banfield and never looked back. She started as a receptionist and eventually learned and worked every job at the hospital level. She switched her college studies from dental school to earn a degree in business administration, and today she has the best of both worlds – combining medicine and the ability to administrate hospitals and impact people and pets.

“The fact that I started as a part-time receptionist to where I am today, it’s an example of the opportunity you have to develop and grow at Banfield,” said Ospina. “The sky is the limit.”