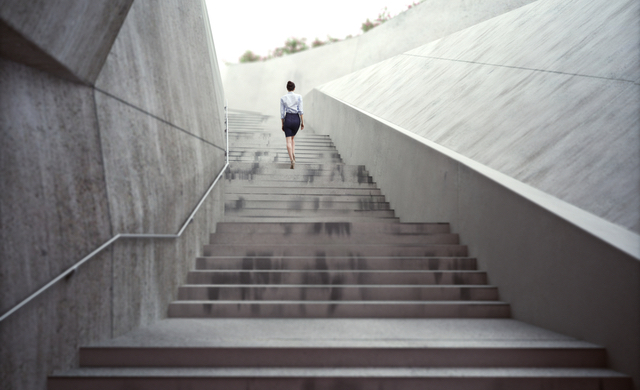 Annie Aston has a map of the world hanging in her house, with red pushpins marking where she and her husband and their kids have been, and white pins pointing out where they want to go.

“We love visualizing where we’ll go next,” she said.

It seems a perfect symbol for her wanderlust, not just for traveling the world but also for the kind of curious, keen exploration that’s characterized her career to this point.

And just like with travel, when you keep taking steps in a direction, with your eyes open to what’s around you and a willingness to step up and take chances, you just might end up somewhere unexpectedly exhilarating.

That’s where Aston finds herself today, career-wise. She is an Equity, Inclusion & Diversity (EI&D) Program Specialist for Banfield Pet Hospital – a role that came about because she followed her curiosity and kept taking more and more inclusion-related stretch assignments, simply because she loved the work so much.

“Right now I’m experiencing a great career moment,” she said. “I pivoted from an administrative role into this new EI&D team, and I really feel like I’m adding value to our associates’ lives, both personally and professionally. I have never been happier at work than I am right now.”

Her current role is not a position she would have envisioned for herself while she was studying at Southern Oregon University to become a physical therapist, running onto the fields to assess football and rugby injuries and helping athletes recover.

While still in school, she studied for a semester in Melbourne, Australia. She traveled extensively around Australia and New Zealand, and met her now-husband during her travels. They kept in touch, and he even came to Oregon to see her graduate. Sharing a love for exploration and for outdoor activity, they camped and hiked in the Western United States.

Aston ended up moving to England, where he’s from. She took that opportunity to travel around Europe, soaking up the history and learning about the world.

Aston had a wedding abroad in Playa Del Carmen, Mexico, and then continued to live in London for seven years where she worked at global firm Ernst & Young as an executive assistant. But she knew she’d eventually return to the Pacific Northwest, where she grew up.

Back in Oregon, she joined Nike in 2010 – a great fit for her since she’s an avid half-marathoner and committed to health and wellness. She started as senior administrative assistant in Global Running Apparel, then supported the executives in the Global Football Apparel group.

“All of the work I did at Nike was fun,” said Aston. “And since Nike is international, I was always talking with people in Europe and in Singapore – so I still had that global connection that I love. But I also always knew I wanted to do something that added more value to my life and to the lives of others.”

One day she noticed Banfield Pet Hospital building its headquarters close to her home, so she looked into it.

Starting off Small Can Lead to Something Bigger

Again, her curiosity and willingness to explore paid off.

She joined Banfield in 2016 as executive assistant, providing administrative support to the senior vice president of human resources (which Banfield calls People & Organization) and for the P&O team of nearly 200 associates.

She readily helped with some of the team’s Equity Inclusion and Diversity (EI&D) projects – helping get name badges that say “I speak Spanish” or “I speak French” for those working in the hospitals, for example. Those turned out to be the projects that interested her the most and were the most fulfilling.

She knew she wanted to be part of the EI&D team.

“I want to help people, and this is something that feels like it truly adds value to people’s lives,” said Aston. “When Banfield started expanding the scope of that kind of work, I jumped at the opportunity to be more involved.”

Her big goal is to continue to help increase equity, inclusion and diversity in the veterinary industry, and she’s excited to be on the team that will tackle that challenge at Banfield and beyond.

As she has shown throughout her own life, taking steps big or small is a great way (maybe the only way) to get somewhere new.

“Every opportunity, even the ones you think are small, can lead to something big at some point when you don’t even know it,” said Aston. “I’ve always just taken on little projects along the way, and now it’s turned into my job. Without those smaller steps, I might not have discovered this passion and vision for improving the lives of associates through inclusion. I’m happiest when I’m doing this kind of work.”